This is a composition for choir and live looping based on Jacques Arcadelt's madrigal Il Bianco e Dolce Cigno. The voices of the choir are recorded and played back live, in effect creating a second, virtual choir accompanying the real choir. One electronic musician triggers the electronic parts from a MIDI keyboard, following the score. Care should be taken in correctly balancing the timbre and volume of the recorded choir to match the live choir as closely as possible. In an ideal sound setup, the two ensembles would be virtually indistinguishable.

Check out the score (PDF here).

Check out this video recording:

This page provides all the information needed to perform this piece. Score and electronic files are released under a XYZABC license ... ?

The list below specifies what electronic equipment is needed to perform the piece. SuperCollider, the software used for recording and playback, runs on all major platforms (Mac, Windows, Linux).

You don't need to have the exact same equipment to run the piece; any good quality equivalent gear should work.

How to run the piece (overview)

Once everything is connected and working, the electronic musician follows these simple steps in order to perform the piece:

Note: if using SuperCollider on a Mac, use Command+Enter instead of Control+Enter to evaluate the code.

There is no need to open any other SuperCollider files or change any of the code. The only exception, to be done in advance, is the one-time mapping of your MIDI controller, as explained in the MIDI section later on this page.

Hardware connections are as follows:

In the premiere of this piece we actually used four loudspeakers for the audience: a stereo pair right in front of the conductor, and a mirror stereo pair placed on the far left and far right of the stage. In practice, while the diagram below shows the mixer on the table on stage with the performers, it may be easier to monitor levels by having an additonal person manage the mixer from the house. 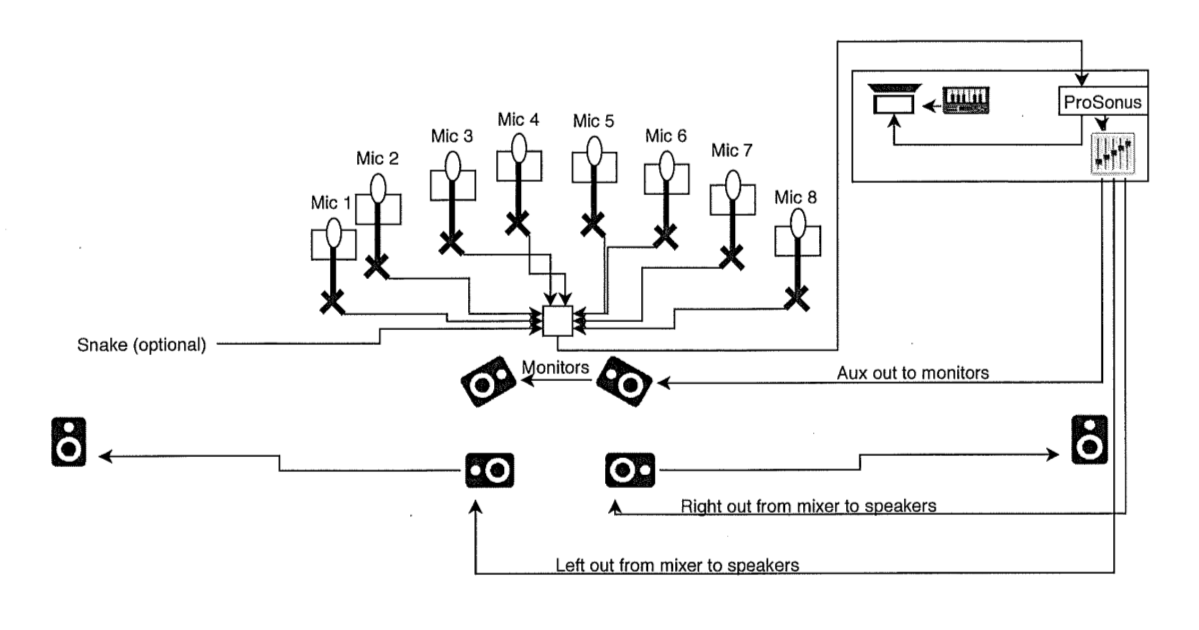 Here are some pictures of the set-up (loudspeakers were not yet in place): 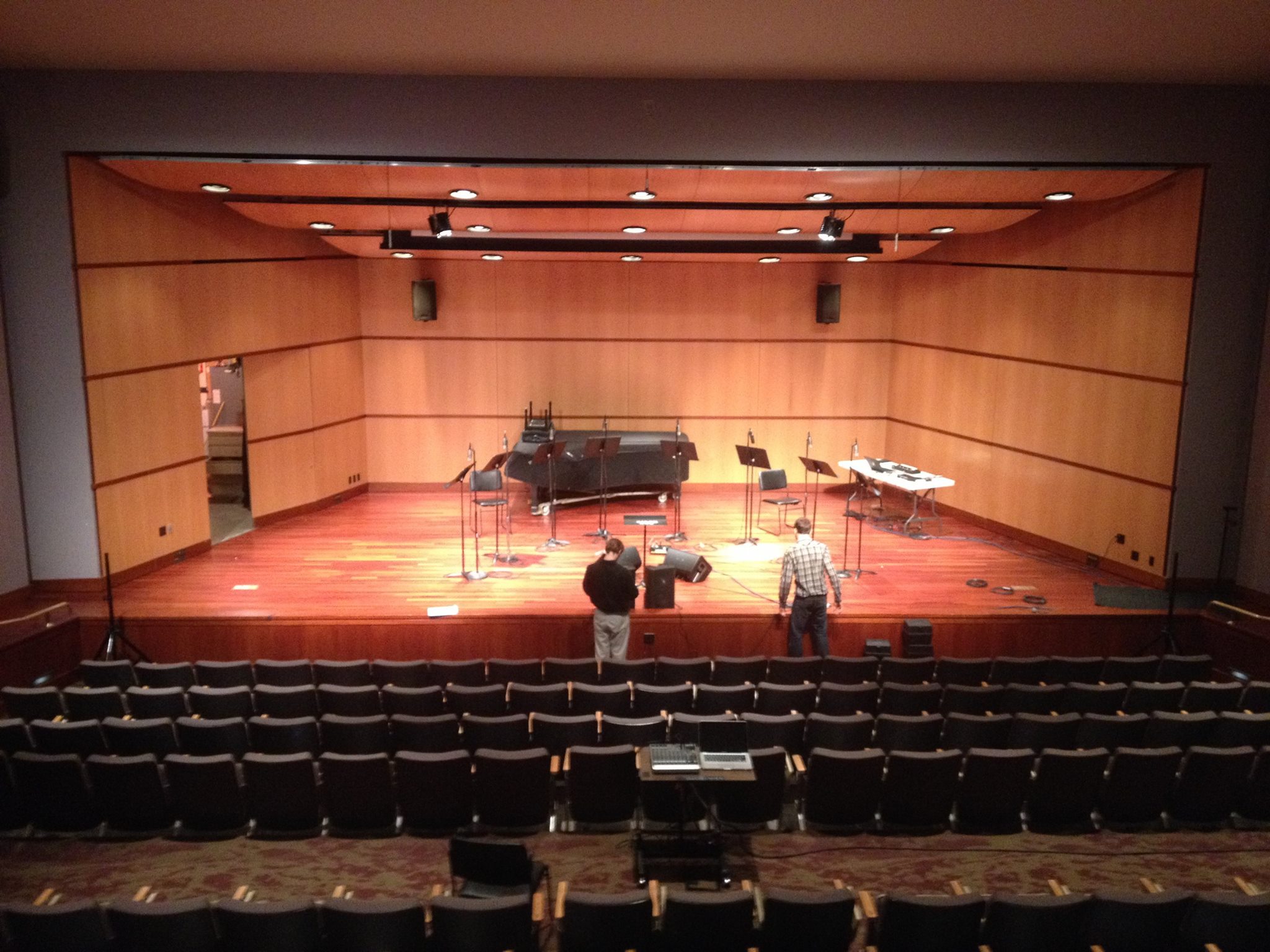 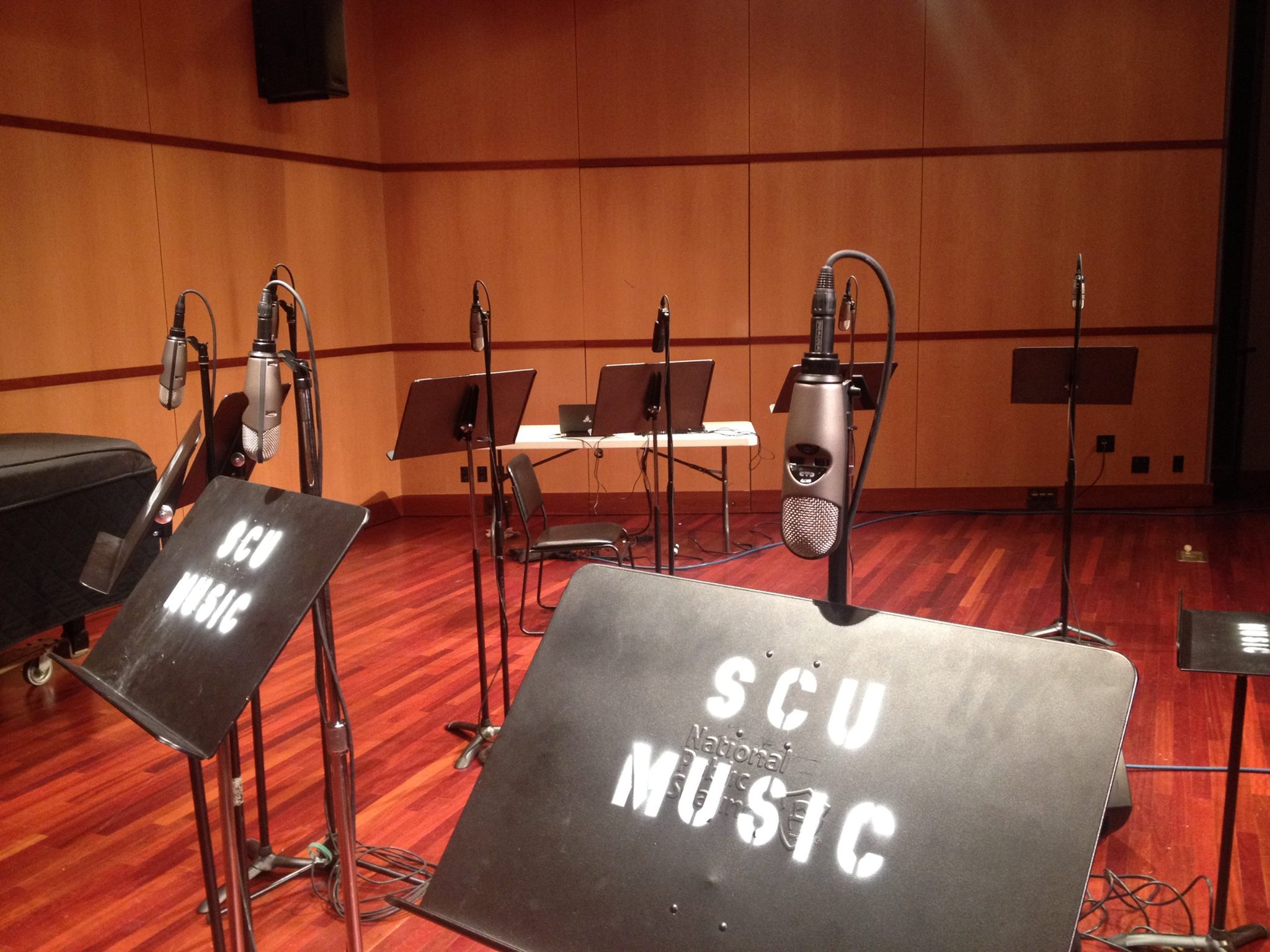 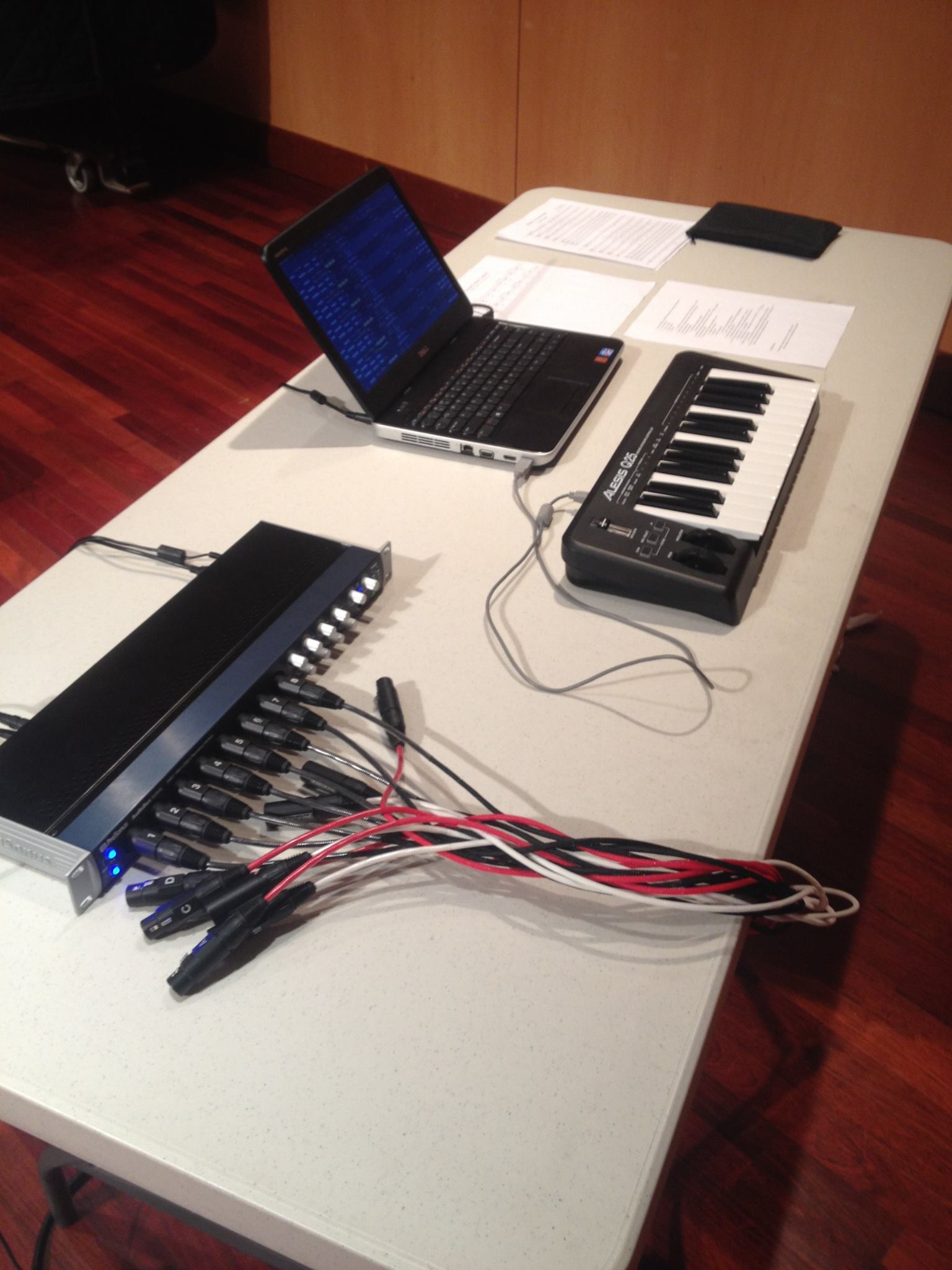 You need a standard MIDI keyboard with at least two octaves available, and with a couple of faders or knobs.

This section assumes the electronic musician will have common knowledge of MIDI. The only action required is to customize the Il-Bianco-MIDI.scd file with the correct control numbers assigned to your faders (or knobs), as explained in the CC mapping section below.

The piece uses midinotes between 48 (C3) and 66 (F#4) to trigger loop recording and playback. MIDI notes between 67 and 72 can be used for silent MIDI testing just before performance.

In addition, your MIDI keyboard should have two knobs or faders available for volume control.

You will need to find out the CC numbers of the two faders/knobs you want to use, and change these numbers in the appropriate place in the code. Here's how:

For example, if you found out your faders are CC numbers 1 and 7, you would change the contents of lines 159 and 167 (the lines starting with the word ccNum:) to look like this:

The sections below are simply for reference. No need to read any of this unless you want to understand the SuperCollider code, make any changes or tweaks, etc.

Simply plug microphones 1 through 8 into the eight inputs of the USB audio interface. SuperCollider will take care of the proper internal routing. The tables below are just for reference.

loop0 and loop7 (stereo) receive sound from all microphones, panned evenly across the stereo field. Soprano mics to the left, bass mics to the right. Loop 7 is for overdub section (bar 52). Code: