(I know why the caged bird sings)

Piece for choir and pre-recorded sounds played through cellphones. 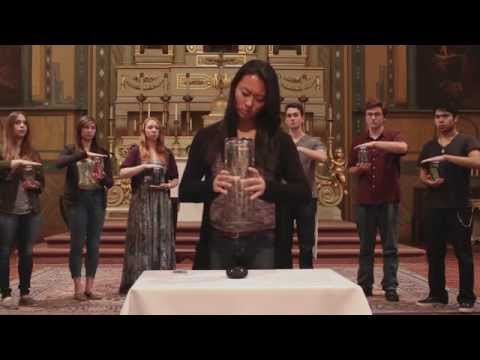 The piece starts with the conductor asking the audience to load one of three sound files to play from their cell phones. Direct links (or QR codes for scanning) should be provided in the program notes to facilitate the set up. The audience files are:

Audience members do not need to hit play precisely at the same time. The conductor should give a start cue, and hopefully everyone will hit play within 10-20 seconds.

After about 60 seconds of bird sounds, a six-note chord will emerge from the sum of all the cell phones playback. The soloist starts her solo against that background.

The full choir comes in right after the end of the solo, as written in the score. At this point, the sound files playing from audience cell phones will be begin to fade out automatically.

At the fermata (m. 44), choir singers quickly pick up their cell phones and mason jars. The cell phones should have been loaded in advance with their individually assigned sound files. Singers should hit play on the cell phones while still singing the long note, and then place their phone is the mason jar. Once a singer can hear the note coming from their cellphone playback, they can stop singing.

From this point on, the conductor will indicate open and closed gestures to the choir to shape the sound produced by the phones in jars. Singers should use their free hand to close/open the opening of the jar.

Each individual in the choir should play a different file from the files available. We have produced such 48 files (this was the number of people in the SCU Concert Choir at the time). Each file contains an individual's voice looped to form a smooth continuous note, together with electronically transformed bird sounds and soft synthesizers. The choir files are all available here:

After approximately 30 seconds of the chord formed by choir members' cell phones, the soloist triggers her pre-recorded solo to conclude the piece. In other words, the solo starting in m. 45 will not be sung live, but through cellphone playback. In the SCU performance, the soloist streamed the recorded solo from her cellphone through small bluetooth speaker (JBL Clip).

As the recorded solo approaches the end, the soloist slowly covers the bluetooth speaker with a transparent (glass) container (a big vase or cookie jar, for example). The idea is to "cage" the last couple sentences of the solo with a container that will mute the sound almost completely. Other choir members will be doing a similar gesture (closing mason jars with their hands).

At the end of the soloist's "caging" gesture, the conductor indicates one last mason jar opening gesture for the choir members, then close again. This ends the piece.

I know why the caged bird beats his wing Till its blood is red on the cruel bars;
For he must fly back to his perch and cling
When he fain would be on the bough a-swing; And a pain still throbs in the old, old scars
And they pulse again with a keener sting— I know why he beats his wing!

The musical setting and performative aspects of this piece are meant to capture and cage the song of the bird in two distinct ways. First, the final solo and sustained chord from the choir is captured as an electronic file on the singers' phones. Second, the sound coming from these phones (or speakers in the case of the soloist) is caged by placing it inside a glass container: dampening the sound, but not completely eradicating it.